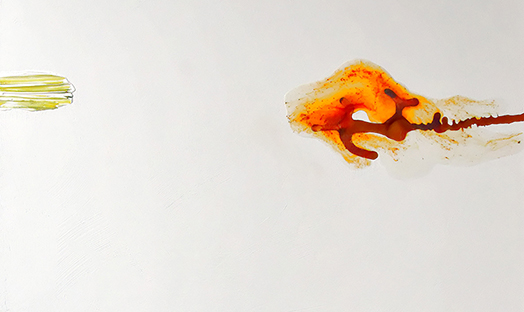 Born in Düsseldorf in 1951, René J Goffin has presented his work at numerous exhibitions since the early 1980s, mainly in Denmark and Germany. A retrospective show of his work entitled “Dirt and Imagination” was shown in parallel in the museums in Flensburg and Tønder in 2012. Characteristic of René J Goffin’s work is his engagement with non-European cultures, which he found through numerous journeys and supplementary studies in ethnology and Austronesian studies.

It is a special characteristic of Goffin’s art that the artist himself tests the colours in their possibilities, makes use of their flowing properties or density, lets them communicate in his paintings: Dripped, shaken, dragged, squeegeed, flowing, faltering, floating, floating up, sinking, the colours appear on the canvas as stains, pools, streaks. The paintings do not get their glossy appearance from a final varnish but from the overlapping of the numerous layers of acrylic paint. Beneath the reflective surface, the realm of painting reigns supreme – bound only by its own laws. René J Goffin himself characterises his new bright and open paintings as a “pause in viewing”.